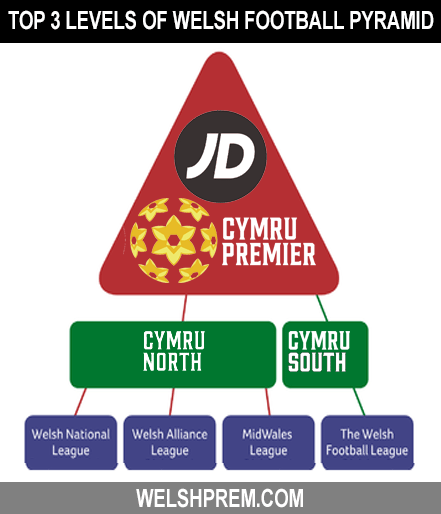 The Cymru Premier is Wales’ national league. Established in 1992 and formerly known as the Welsh Premier league, the Cymru Premier is comprised of 12 teams, who play each other twice in the first phase of the season. At the end of this period the league splits into two divisions, the Championship Conference and the Play-off Conference.

The Championship winners qualify for the Champions League, with clubs finishing in third to sixth, and the Play-off champions, taking part in a knockout to determine who gains the third Europa League spot, along with the Championship runners-up and the Welsh Cup winners, who go straight into the second qualifying round.

Should the Welsh Cup winners be among the clubs qualifying for the play-offs, the second-placed Play-off club would be invited to take their place.

The Cymru Premier has two feeder leagues, known as the Cymru North and Cymru South since the start of the 2019-20 season, when the Football Association of Wales took over control of the second tier of Welsh football following a review of the Welsh league pyramid.

The champions of each of these leagues can be promoted to the Cymru Premier, subject to acceptable ground facilities, and if the champions cannot meet the criteria the runner-up team may be considered.

The Cymru North replaced the Cymru Alliance, whilst the Cymru South incorporated most the clubs of the old First Division of the Welsh Football League.

The Cymru North has three regional leagues feeding it… the Mid Wales League (covering Powys and Ceredigion), the Welsh Alliance League (covering all of the north except Wrexham), and the Welsh National League (Wrexham Area, covering the region around Wrexham). Again, the champions or runners-up of these leagues can be promoted, given suitable grounds.

The West Wales FA area is the only one not to have a senior league in its area – this means that there are four local leagues (Pembrokeshire League, Carmarthenshire League, Swansea Senior Football League and the Neath & District League) with all their champions potentially having to play-off for the one available promotion place.