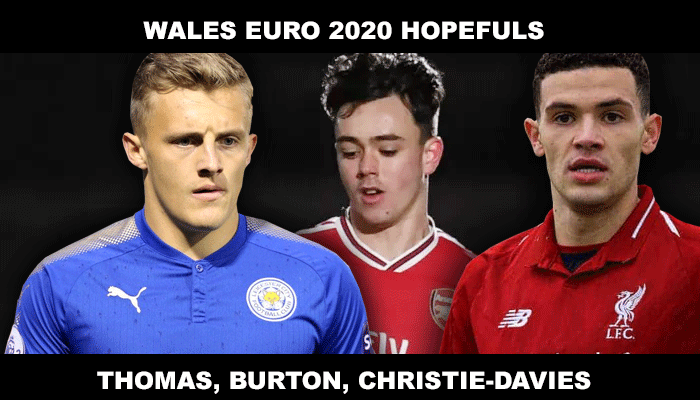 With a number of members of his potential squad for Euro 2020 suffering significant downtime this season because of injury, Ryan Giggs could turn to his growing legion of overseas aces to bolster the Dragons Euro 2020 prospects this summer should further setbacks jeopardise his plans.

Two of his key players, Gareth Bale and Aaron Ramsey, ply their trade on the continent but have both missed a fair chunk of the season through injury. The good news for Giggs is that they are now back in action and barring further setbacks should be raring to go for this summer’s tournament.

But a number of home-based stars such as Bournemouth’s David Brooks and Chris Mepham, both still sidelined, and Charlton’s Jonny Williams and Swansea’s Joe Rodon have also had extended periods out during the current campaign.

However, if injuries are to play a significant part in squad selection, Giggs can find some solace in the fact that a growing number of young Welsh players are joining Real Madrid’s Bale and Juventus’ Ramsey on the continent and gaining valuable experience in some of Europe’s top leagues.

Chelsea youngster Ethan Ampadu, 19, is already a key figure in Giggs’ squad but a lack of game time for the Blues has seen him head to Germany on loan until the end of the season. Although the highly-talented defensive-midfielder hasn’t seen a great deal of action at RB Leipzig, he has picked up valuable experience as a regular on the first-team bench… making three substitute appearances against Werder Bremen, Hertha and Mainz 05.

Also earning his keep in the Bundesliga, 19-year-old Rabbi Matondo is another who has already broken into Giggs’ squad after leaving Manchester City in January last year to sign for Schalke 04. Matondo made his professional league debut as a substitute in a 2-0 home loss to Borussia Monchengladbach and started for the first time in February 2019 in a goalless home draw with SC Freiburg.

After five further substitute appearances last season, Matondo scored his first goal after starting for Schalke in a 3-1 away victory over RB Leipzig in September.

The winger has made another five starting appearances this campaign, the latest in a 5-0 defeat at Bayen Munich last month, and has come on as a substitute on four occasions.

Lawrence, who was based in the Netherlands from the age of 16, played 23 league matches for Anderlecht during the 2018-19 season as they finished fourth in the Jupiler Pro League and in sixth place in the play-offs, missing out on Uefa competition for the first time in 56 years.

Henley-born Lawrence has also played youth football in the Netherlands for HFC Haarlem, Ajax, Sparta Rotterdam and RKC Waalwijk, before signing for Slovak side AS Trencin in August 2014.

The defender scored five goals in his 86 appearances for Trencin and moved to Anderlecht in August 2018.

The Wales under-21 midfielder had been with the Gunners academy since he was six and captained the under-23 side this season.

Burton secured his first professional deal in August 2018 and made his first-team debut during Arsenal’s pre-season tour of the United States and also made an appearance against Nottingham Forest in the League Cup back in September.

The Gravesend-born youngster, who qualifies for Wales via a grandfather from Aberystwyth, has won eight caps for the under-21 side.

Another Welshmen with experience in the Netherlands is 22-year-old Leicester loanee George Thomas, who joined Eredivisie-side ADO Den Haag last month until the end of this season.

Thomas, who has started twice against Utrecht and RKC Waalwijk, won his first senior Wales cap against Mexico in May 2018, replacing Harry Wilson as a 64th-minute substitute.

Liverpool youngster Isaac Christie-Davies is also likely to be on Giggs’ radar after leaving Anfield last month to join Cercle Brugge in the Jupiler Pro League in Belgium until the end of the season.

The 22-year-old, who signed for the Reds from Chelsea in 2018, made his senior debut in December in the 5-0 loss to Aston Villa in the League Cup but is yet to play in the Premier League for Liverpool.

Christie-Davies, who has two Wales under-21 caps, faces a tricky time at Cercle Brugge, who currently prop up the league after losing 19 of their 26 games so far this campaign.