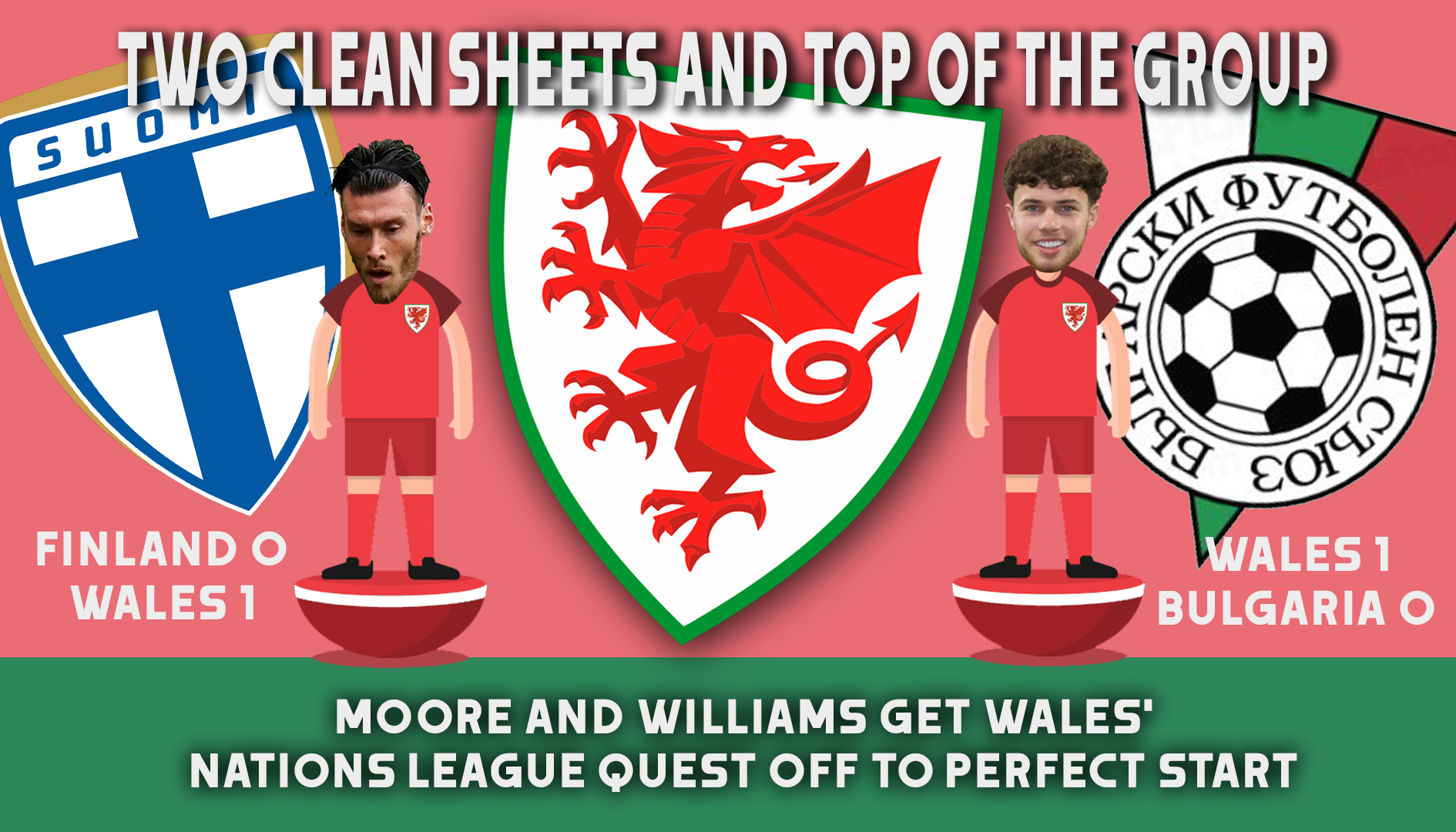 Two goals, two clean sheets and two matches where Ryan Giggs’ young guns controlled proceedings for most of the 90 minutes saw Wales get their Nations League campaign off to a perfect start.

With the Dragons following up a 1-0 win against Finland in Helsinki on Thursday with another 1-0 victory against Bulgaria yesterday, they now sit on top of Group B4 three points ahead of Finland, who bounced back from defeat against Wales to beat the Republic of Ireland 1-0 in Dublin.

Both Bulgaria and the Irish are five points adrift of Giggs’ men after they fought out a 1-1 draw in Sofia on Thursday.

Yesterday’s win went right down to the wire though, with substitute Nico Williams popping up on the far post with almost the last touch of the game to nod home Jonny Williams’ cross to seal the three points… the Liverpool youngster saving Wales from a frustrating home draw against Bulgaria in a game they dominated from start to finish but failed to carve out many clear scoring opportunities in.

Giggs’ side only managed one shot on goal in a flat first half, with Bulgaria content to sit back and contain their opponents. Wales played with more intent after the break but, after David Brooks hit the post late on, it looked like their pressure would be in vain against a dogged Bulgarian side.

However, after some neat interplay in the fourth minute of added time, 19-year-old right-back Williams stole in at the back post to head home his namesake’s deep cross, much to the relief of his exuberant teammates.

The win extends Wales’ unbeaten run to eight games and a second victory from their opening two Nations League matches puts them top of the group, with the next round of games due for the second week in October.

In an attempt to inject some much-needed urgency into his team, Giggs turned to the bench after an hour at Cardiff City Stadium, introducing West Bromwich Albion forward Hal Robson-Kanu, making his first appearance since 2017 having reversed his decision to retire from international football, and Liverpool defender Williams, winning his second cap.

Robson-Kanu made an immediate impact with his clever hold-up play and Williams linked up well with a leggy Gareth Bale, who never really looked up to the pace after his troubled season at Real Madrid, which saw him occupy the bench for much of the year.

The changes saw Wales start to look more dangerous going forward, Daniel James and Brooks linking up well on the left. And, as the clock ran down, the two players combined to create Wales’ best opportunity to that point. James cushioned a crossfield pass from Bale into the path of Brooks, whose half-volley clipped the angle of post and crossbar.

That proved to be Brooks’ final contribution before being replaced by Jonny Williams, with all three substitutes combining to get the Dragons roaring at the final whistle.

As the game ebbed into the final minute of added time, Robson-Kanu held off the Bulgarian opposition and laid the ball onto Jonny Williams, who sent a deep cross towards the back post, where Neco Williams timed his run perfectly to nod the ball into the ground and then the net.

Although it wasn’t a classic Welsh performance it was a clear indication that Giggs’ young side have the maturity to keep plugging away to the final whistle and are learning how to control possession, with Ethan Ampadu and Tom Lockyer combining well at the back to give Wales a solid defensive platform to build on.

And three days earlier in Helsinki the story had been much the same, with Giggs’ men putting in a solid performance without creating many clear-cut opportunities in front of goal.

The winner didn’t arrive until the 80th-minute when Kieffer Moore converted from close range after meeting a low cross from James, although the Cardiff City recruit seemed to have put Wales in front after just four minutes only to have what appeared to be a well-crafted goal ruled out.

After getting the better of a grappling match with his Finnish marker, who appeared to stumble as Moore broke free of his clutches, the former Wigan striker beat the keeper and a second defender to head home James’ cross, only for the goal to be struck off for the earlier tussle.

Shortly after the break Wales had a bit of good fortune though when Finnish defender Leo Vaisanen fluffed his lines, striking the woodwork with an open goal beckoning after stealing in at the near post to meet a flicked-back header from a corner.

That effort aside, Wales again controlled most of the possession but failed to find the breakthrough until the final 10 minutes when Moore converted from close range after James, Wales’ most potent creative weapon on the night, sped down the left wing and produced a perfect low cross for him.

That well-worked goal was a rare moment of quality in a second half that had threatened to fizzle out into something of a non-event for Giggs’ side, although further positives from the evening included the emergence of more fledgling talents, including debuts for Manchester United midfielder Dylan Levitt, Swansea City centre-back Ben Cabango and yesterday’s goal hero Neco Williams.

Next on the agenda for Wales is a “challenge match” against England, who stumbled to a 1-0 win in Iceland in their opening Nations League encounter on Saturday and are back in action in Denmark tomorrow.

That match against the “old enemy” takes place at Wembley on 8 October, with the Nations League business getting back into full flow with a home tie against the Republic of Ireland three days later. Then Wales head off to Sofia to play their return tie against Bulgaria on Wednesday, 14 October.